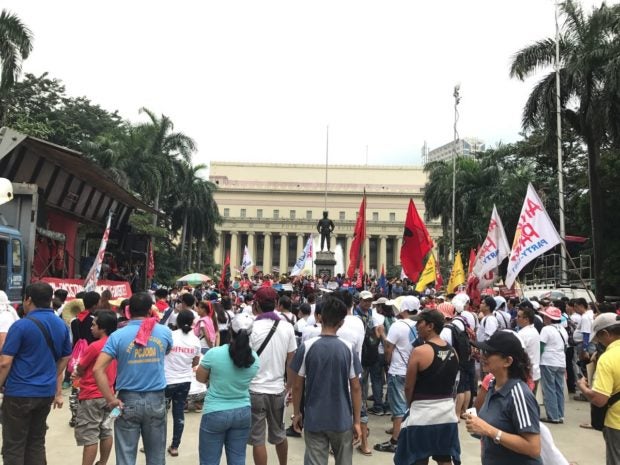 FILE PHOTO. Protesters for the Bonifacio Day rally gather at the Liwasang Bonifacio in Manila before they are scheduled to march toward Mendiola for another demonstration. INQUIRER.net / Pathricia Roxas

MANILA, Philippines — Foreign nationals in the country should “steer clear” from rallies and other political demonstrations, the Bureau of Immigration (BI) reminded Thursday.

“Foreigners should steer clear from political engagements to avoid being charged with violating immigration laws here in the country,” Morente said in a statement.

The bureau reminded that under the rules, foreigners are prohibited from “joining, supporting, contributing, or involving themselves in any rally, assembly, or gathering” while in the Philippines.

The warning was made to “prevent a repeat of past incidents wherein they had to deport and blacklist foreigners who participated in partisan political activities,” Morente said.

“Foreigners who were caught joining political demonstrations in the past have shown disrespect to our country’s authorities,” Morente said.

“Foreigners are prohibited from engaging in partisan political activities. Those who will be caught will be deported and blacklisted,” he explained.

The Philippine National Police earlier discouraged protests near the National Museum but will allow them in freedom parks and places that are not near the inauguration site. – Xander Dave Ceballos, INQUIRER.net intern

Bureau of Immigration to foreigners: Keep off mass demos, rallies

Protests discouraged but OK if not near inauguration site – PNP

Don’t miss out on the latest news and information.