National Unity MK Gadi Eisenkot, a former IDF chief of staff, will join anti-government protests on Saturday night, following his call for a million Israelis to take to the streets to demonstrate against the government and its planned radical remake of the judiciary.

However, fellow party MK Matan Kahana will not attend the protests at Tel Aviv’s Habima Square, having said that he does not want to be seen standing next to Palestinian flags (which were seen, along with placards bearing Nazi symbols, at last week’s Tel Aviv protests).

This decision is another own-goal by those who oppose the government.  Kahana’s intended no-show at the demonstration carries special weight because he symbolizes the segment of the national religious population that opposes Prime Minister Benjamin Netanyahu and his right-wing government.

Some in this segment of the electorate voted in November for Kahana and his allies who joined National Unity, but they are still a minority within their community. The vast majority voted for the Religious Zionism list, mostly because of Otzma Yehudit chair Itamar Ben Gvir and his hardline stance on security issues.

If protesters, aiming for a vast turnout on Saturday night and planning more demonstrations in the future, want to be successful, they have to bring in these growing voices of opposition from within the national religious camp.

Kahana’s decision to stay away is a mistake. You cannot give up on the historic struggle that will determine the fate of the country because of a few flags that reflect an opinion or stance that you do not accept. 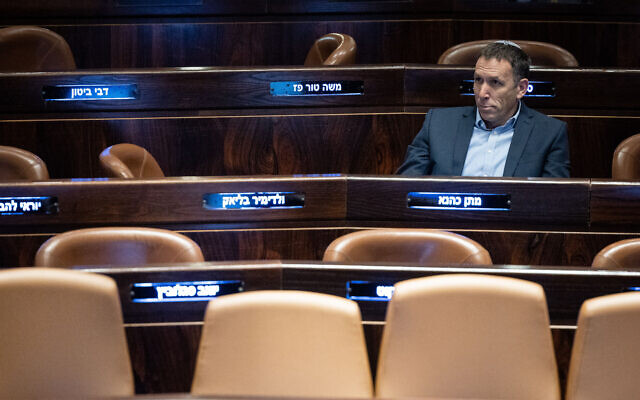 MK Matan Kahana at a plenary session in the Knesset in Jerusalem, December 14, 2022. (Yonatan Sindel/Flash90)

People like Kahana — who is one of the fiercest critics of the government’s planned judicial overhaul — do not have the luxury of staying at home instead of attending protests where their presence could have a meaningful impact.

But the organizers of the demonstrations also need to work to ensure that all those deeply troubled by the coalition’s declared agenda are able to feel part of the protest movement.

There is growing criticism among those who support the government following its latest moves.

In an article on Friday, Yehuda Ifrach, the legal correspondent for right-wing daily Makor Rishon, urged the coalition members to “calm down, and quickly.”

In the piece, Ifrach slammed members of Otzma Yehudit, particularly MK Zvika Fogel, Almog Cohen, and Limor Son Har-Melech, labeling as “stupid” and “nonsense” the calls they made this week to arrest and charge opposition leaders with “treason” for the ostensible crime of urging Israelis to take to the streets to demonstrate against the government.

“If the so-called right-wing had an iota of responsibility, they would shut their mouth, behave responsibly, stop yelling, screaming, and cursing, and invest their energy into quietly working. But responsibility is a dirty word today,” Ifrach wrote.

Protesters against the government also need to behave more responsibly. The anticipated Saturday night demonstration of 50,000 people in Tel Aviv is a good start, but the goal of Eizenkot and others is to rally millions to the streets.

That will never happen if Saturday’s event sees violence, provocations, blocked roads, Palestinian flags, and Nazi symbols. The police have already hinted that they have intelligence that such disruptions are planned — a publicized assessment that has led to claims that the police, now under National Security Minister Ben Gvir, are trying to deter participants. 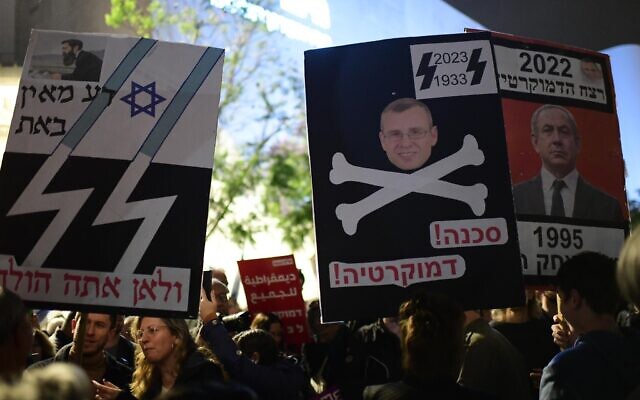 A peaceful protest of a million people is a lot more effective than a noisy, violent, smaller one. All segments of the population that oppose the government, especially the religious public represented by Kahana — and maybe religious Zionists who voted for the right but are horrified by what is happening today — need to feel comfortable attending, not alienated by a divisive, overtly partisan tone.

This is not the time for internal quarrels. Everyone needs to give up a little for the sake of a shared goal because otherwise, everyone will lose the most important campaign since the establishment of the state.

Both opposition leader Yair Lapid and National Unity head Benny Gantz are determined to battle the hard-right coalition. Both wanted to speak at Saturday’s event.

The organizers, correctly, declined to let them; Gantz has said he will nonetheless attend; Lapid, insulted, apparently will not, but his Yesh Atid party’s supporters will.

Like Kahana’s planned stayaway, Lapid’s is a misstep. The campaign is much more important than Lapid or Gantz’s status. Unfortunately, thus far, no one in the opposition is demonstrating real leadership.

This op-ed was translated and edited from the original on Zman Yisrael, The Times of Israel’s Hebrew sister site.

We’re really pleased that you’ve read X Times of Israel articles in the past month.

That’s why we started the Times of Israel ten years ago – to provide discerning readers like you with must-read coverage of Israel and the Jewish world.

So now we have a request. Unlike other news outlets, we haven’t put up a paywall. But as the journalism we do is costly, we invite readers for whom The Times of Israel has become important to help support our work by joining The Times of Israel Community.

For as little as $6 a month you can help support our quality journalism while enjoying The Times of Israel AD-FREE, as well as accessing exclusive content available only to Times of Israel Community members.

Thank you,
David Horovitz, Founding Editor of The Times of Israel

‘It was a massacre’: fury and grief amid Peru’s worst political violence in years